On this July 4th weekend, may we be grateful for our freedoms. May we take a moment to really think about all the many things we’re free to do and send up thanks for them. 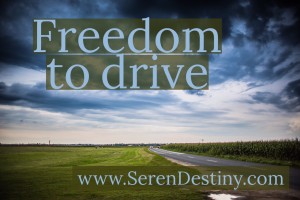 Of the many freedoms we have, my Year by the Water has given me multiple opportunities to revel in one of the most precious; the ability to travel freely, the ability get up and GO … without asking permission, without being regulated, without being told NO.

One of the first times I really became aware of how rare this is, and how many of us take it for granted (and shouldn’t) happened in the middle of a blizzard in the mountains by Yosemite.

We had booked a cabin at a family lodge that had ping pong, group dining, a huge fireplace, board games, and supposedly, snowshoeing and sledding.

Since we lived in Maui at the time, playing in the snow was a big draw for Tom and Andrew, who were about six and eight. What we hadn’t counted on was bad weather that kept us inside most of our time there.

One night, we were gathered in the main lodge and the front desk manager was really worried. A couple who were supposed to check in that afternoon still hadn’t arrived, and it was getting late. The manager was concerned their car might have gone off the narrow, windy road or gotten stuck.

Finally, with a gust of wind, the door opened and the couple walked in, much to everyone’s relief.

I was standing by the desk while they explained they had gotten lost. But, and here’s the part that made a lasting impression on me, they didn’t panic because they were in America! They were originally from RUSSIA.

In Russia, if they wanted to make a long trip, they’d have to give their itinerary to the authorities. If they didn’t made a checkpoint at a certain time, they would come under suspicion, perhaps even be arrested. Here in America, they didn’t fear something bad would happen to them simply because they’d become lost. They felt safe.

That memory floated back to me yesterday while driving through the glorious Smoky Mountains during Golden Hour … and listening to the final show of A Prairie Home Companion.

President Obama called in to give Garrison Keillor a well-deserved shout-out for his 42 years of story-telling that’s “made us all a little more humane.”

When asked what he was looking forward to when he’s out of office, Obama talked longingly of getting in a car without the Secret Service and GOING FOR A DRIVE on California’s Pacific Coast Highway.

See, going for a drive is a “satisfied need.” Abraham Maslow said that once a need is satisfied – whether it’s a survival need like having food, water and shelter – or a community need like family and friends – it is no longer a motivator. We tend to overlook it, take it for granted. We don’t miss it until we no longer have it.

The freedom to get in a car and just take off – anytime, anywhere, with anyone – is something we usually don’t even think about. In fact, if we think about it at all, it’s usually to complain about the traffic, the weather, or “Are we there yet?”

This weekend, if you get in a car to head to the beach, the mountains, a community or national park to celebrate with family and friends, instead of thinking how hot it is or complaining how long it takes to get where you want to go – could you instead look around and MARVEL at what it really means to have the freedom, independence and luxury to drive where you want, when you want?

As I travel this great country of ours, I am amazed and impressed with its beauty, its variety, its abundance.

Our freedoms do not deserve to be taken for granted. They deserve our attention, respect and appreciation. Happy 4th of July weekend.