I had the pleasure of sharing my “What’s Your Legacy Message?” workshop with ‪#‎CAM‬ – Conversation Among Masters – last week in Las Vegas.

This is a unique group of the world’s top master coaches who have the tangible joy of doing work they love that matters. 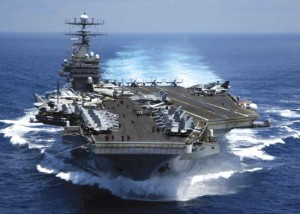 The thing is, many have been doing this type of work for 20-30 years.

What can we do NEXT when we really like where we are?  How can we evolve and move forward in fresh, perhaps even more meaningful, ways instead of doing what we’ve always done?

Many participants came up after my workshop to tell me my “aircraft carrier” metaphor really resonated with them.

One said, “I never saw my career as an aircraft carrier. Now that I do, I see how easy it would be to just keep steaming along in the same direction unless I choose to do things differently.”

I shared with the group that a Navy pilot who used to fly off aircraft carriers told me something about them I’ve never forgotten.

“Do you know how you STOP an aircraft carrier? You DON’T. You can turn off the engines, but it keeps going for miles because of its mass and momentum. Even if you put the engines in FULL REVERSE, it takes up to 4 miles to come to a complete halt. Just to TURN an aircraft carrier can take up to 10 miles.”

There was nothing WRONG with my life. I was happy. I loved my family, friends, job, the people I get to work with, where I lived.

If we agree with Helen Keller that life is abundant and supposed to be an adventure, an experiment …

Then it was time to jump off the carrier and do something different.

It’s a big ocean out there and I was only seeing/experiencing part of it.

In our program, I shared many reasons people DON’T get off their aircraft carriers. Responsibilities. Obligations. People depending on them. Fear. Bills to pay. Perceived lack of money or education. The default of habits. The anchor of the status quo.

Some of us simply don’t know what to do next and we’re not about to abandon a “sure thing” for the uncertain.

We addressed those “barriers to exit,” and I shared inspiring success stories of people who overcame their initial “failure to launch.”

I shared that one barrier that’s come up for me, and that seems to be an issue for many people, is that jumping off an aircraft carrier can come across as “selfish” when we have others relying on us.

Such is the case for George R.R. Martin. Yes, the author of the incredibly successful Game of Thrones series. 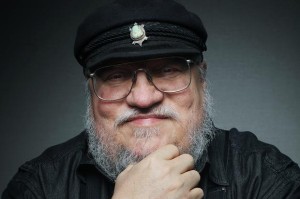 I read a startling excerpt from a Daily Mash interview where GRRM (as he’s called in the biz) said,

“I was a hundred thousand words into Winds of Winter. I’ve got armies in one continent, zombies in another, dragons burning things all over the place and numerous uninteresting sub-plots involving minor noblemen whose names I cannot currently recall. It is, by anyone’s reckoning, a … nightmare.

I was looking at several more months of inhumanly hard graft and even then everyone is bound to slag it off as ‘unsatisfying’.

Meanwhile it is a lovely day outside and I am an older man with more money than I can possibly ever spend.

You tell me why I should finish this? It’s an honest question. Someone else can do it if they like, I’m cool with that.”

As you can imagine, his publisher, HBO and millions of fans are pressuring him not to. They want, need, expect him to continue producing the books they love.

The question is, “WHOSE LIFE IS IT ANYWAY?”

After dedicating decades of his life to creating a series that has delighted people around the world and made millions of dollars – for him and others – does he have the RIGHT to do what HE wants at this stage of his career and life?  To put his commitments aside and enjoy the lovely day outside?

Who is he beholden to? His fans and followers? Or himself?

Do you have the right to do what YOU want? Is that selfish? Whose life is it, anyway?

Even if your life and career are headed in good directions, are they the SAME directions they’ve been going in for decades?

Is it time to evolve, to explore other areas of the ocean you haven’t yet seen?

There are options of course.

What are your thoughts about this?