Would you call yourself a brave person? Do you think you’re courageous?

I’ve learned that courage is just another word for being resourceful. It’s going ahead even when you don’t have all the answers. It’s trusting you can figure things out along the way.

I got clear about this while sailing the Chesapeake Bay with Captain Jen on her classic schooner. She generously gave me a chance at the helm of her classic schooner the Woodwind (the beautiful yacht featured in the movie Wedding Crashers with Vince Vaughn, Owen Wilson, Christopher Walken and Rachel McAdams.)

What a thrill to feel the sails fill and the boat lift. While beaming from ear to ear, I asked Jen how she got into the business and she shared her backstory.

Jen sailed competitively through college and tried different careers but nothing “stuck.” She and her parents found this beautiful yacht, named her Woodwind, and invested their savings into buying it so Jen could start her own charter business. Jen drove up and down the East Coast searching for the perfect location to operate out of – and found it in Annapolis when she saw the Marriott had an unused dock by their waterfront restaurant.

She walked into the General Manager’s office and convinced him it would be a win for the property (“Think of the extra room nights and food/beverage income from new guests.”) to allow her to rent that space.

I told her I admired her entrepreneurial spirit and told her the second most-asked question on my Year by the Water was, “How did you get to be so brave?”

I told Jen I never once thought of this as being “brave.”

She smiled and said, “Me neither.”

She told me her folks (both music teachers) owned a boat from when she was a little girl and they often spent summers aboard. Jen remembered them giving her $5 and sending her off in a little dinghy to “get some ice cream.”

She laughed, “I didn’t realize until years later that was their way of getting some privacy. What I also didn’t realize was those solo forays in that dinghy taught me to trust the world. My parents didn’t warn me of the “dangers” of going off on my own. They had confidence I could handle whatever came up, so I had confidence too.”

Instead of being afraid something might go wrong, we understood things probably would go wrong at some point, and when they did, it was our responsibility to be resourceful.

We didn’t panic or sit around and wait to be rescued, and we didn’t feel abandoned or think our parents didn’t care about us. We learned we could take care of ourselves – which is the core of courage.

Setting out with anticipation (vs. apprehension) was our norm and Jen’s norm too.

I’ve since learned that for many people, their norm was just the opposite. Their norm was to have over-protective parents who constantly warned them to “be careful.” They weren’t sent off into the world with opportunities to discover their own way; they were cautioned about the danger of strangers and were hovered over by parents who rushed in at the first sign something might go awry.

My folks are gone now – so all I can do is send up heartfelt thanks for giving us a childhood where self-sufficiency was encouraged and where the world was depicted as a wondrous place, waiting to be explored.

One of the reasons my Year by the Water (and my life) has been so rewarding is because I know in my soul that “Courage is simply trusting – that no matter what happens – I can figure it out. Bravery is simply another name for resourcefulness.”

After being an entrepreneur for thirty years, and after having the privilege of working with many entrepreneurs in many different industries; I’ve come to understand that entrepreneurs are explorers and adventurers at heart.

Entrepreneurs revel in their independence. They’re not intimidated by uncertainty, they welcome it. They find new ventures exciting (not frightening) because they trust their ability to “figure it out.” Instead of being afraid something might go wrong; they jump in and proactively fix what’s wrong. They know the world rewards the resourceful.

Do you want to launch something and you’re scared? Do you want to start a small business, write a book, learn a new skill, return to a favorite hobby – but you don’t know exactly how to do it or you’re afraid you won’t do it perfectly?

Do it anyway and figure it out along the way.

As my son Andrew would say, “GTS it. GTS = Google that Stuff. You can find out ANYTHING you want to know in seconds. If you put “How can I start a small business? How can I start my own web design agency? How can I get funding for my startup, How can I market my new business?” into search, up will come the answers to the test. There’s no mystery how to do things anymore. Experts are sharing their best practices for free and they can guide you on your way.

Print this out and take a friend to lunch today. Use this as a discussion guide to support you in seeing yourself as brave and moving forward what you would like to do.

1: Reflect and look back to clarify your beliefs: Were you brought up to trust or distrust the world? Were you encouraged to explore – to be entrepreneurial? Were you given opportunities to “figure things out?” Do you play it safe? Do you worry about things going wrong or do you expect them to and just get resourceful when they do?

2: Look ahead to clarify what you’re going to believe from now on: Start thinking of yourself as courageous. Trust you can figure things out along the way. Instead of thinking, “I don’t know, so I can’t go,” GTS what you need to know. Set things in motion. Understanding that if things can wrong, you can handle them. Picture how fulfilling life is going to be now that you see it as an adventure; how exciting it’s going to be to explore new opportunities, go new place, make new friends, delight in new discoveries. 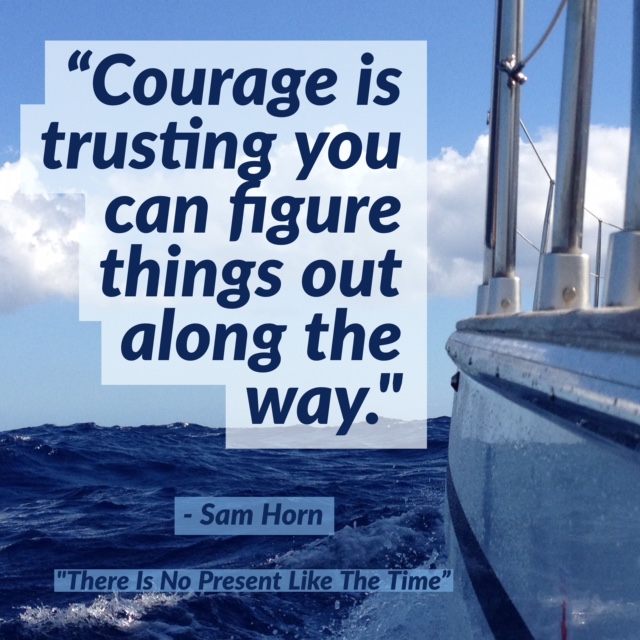