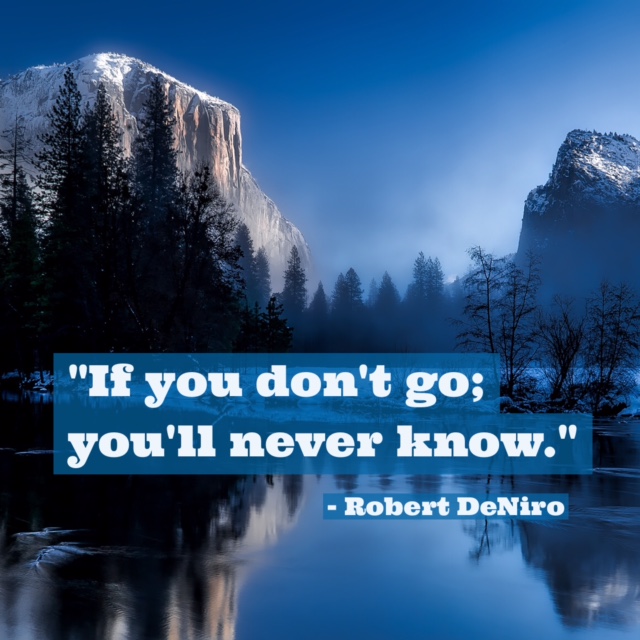 Many of us operate with the opposite of Robert De Niro’s insight.

The problem with that?

By definition, anytime we try something for the first time, anytime we launch a new venture … we DON’T KNOW what we’re doing.

If “knowing what we’re doing” is a prerequisite for moving forward … we never move forward.

Yikes.That’s where GTS comes in. What’s GTS? Let me explain.

A year after my son Andrew graduated from VA Tech with a business degree, we were having dinner.

Andrew had “lucked out” and found a job as an executive recruiter. He was the envy of his college buddies because he was working in a classy downtown office building, making good money and working for a respected, well-connected industry icon who was arranging for him to do neat things like work at events with President Obama and Tony Bennett. Not the normal career trajectory.

Yet, as Andrew talked about his work, I could tell the light had gone out in his eyes. There was no spark. In fact, he used a word I’d never heard him use before. Exhausted.

I asked, “So, are you going down to VA Tech this weekend for Homecoming?”

“Nah. By the time I’d drive down there, I’d only have a few hours before I’d have to turn around and come back. I just don’t have the energy. I’m exhausted.”

Exhausted?!? How could that be? How was it this normally energetic 20-something who “had it all” was feeling burned out?

He said, “Mom, I want to quit. I’m grateful for this job, but sitting inside all day at a computer researching job openings and making cold calls is not what I was born to do.”

Andrew said with a huge smile,. “I want to start a non-profit.”

I have to admit, a conservative person I didn’t even know existed in me popped up and perched on the tip of my tongue. This person wanted to say, “Non-profit?! Do you know how many non-profits are going out of business because donations have dried up? How are you going to pay bills? What about health insurance?”

Thank heaven a wiser voice in me prevailed that asked, “Isn’t this exactly what 20-somethings ought to be doing at this stage of their life?. If Andrew doesn’t go for what he wants now, he may never get a chance later. Good for him for wanting to do work that matters. His dream deserves to be supported, not shut down.”

So, instead of bringing up all the reasons this might not work, I said, “Andrew, you’ve always been resourceful. If you apply yourself and put your mind to it, I know you can pull this off.”

You may be thinking, “But how could Andrew pull this off? He’d never run a non-profit before. He doesn’t even know what it takes to make this a success.”

That’s true, and that’s where GTS comes in. GTS stands for Google That Stuff. (As you can imagine, Millennials sometimes substitute another word for stuff.)

Andrew thanked his boss for giving him that job opportunity right out of college – and then promptly got online and Googled “How can I start a non-profit?”

Up came dozens of resources – all telling Andrew exactly what steps he needed to take to “get his bandwagon out of the garage” – how to get a license, develop operating procedures, find a team, develop a website and get funding.

In the course of one year, Andrew recruited 20 (!) interns and found a collaborative work space at the Affinity Lab in Washington DC. It was the ideal environment to get other people on his bandwagon. For example, someone a couple desks over would ask, “Andrew, what are you working on today?”

Andrew would say, “I’m applying for a grant,” and she would say, “Oh, I did that last year. You can borrow my grant proposal and use it as a template.”

Or, he’d admit he’d run into an obstacle finding a location for one of his activities, and that person would say, “Here’s the phone number of ____. Call her and let her know I referred you to her.” Voila, That lead was exactly what he needed to jump the chain of command and arrange for a water-sports event at a local lake park.

Andrew never had to go it alone as he was surrounded by others who shared and supported his vision and had his back … and front.

The result? Dreams for Kids/DC has sponsored hundreds of adaptive athletic programs for kids with disabilities and gotten them off the sidelines and into the games of life. They have sponsored Extreme Recess clinics with the Washington Nationals, Capitals, Wizards, Mystics and United soccer teams, and made a positive difference for thousands of young people through their Dream Leader programs in schools and their annual Holiday for Hope program at Howard University.

The point? None of this would have happened if Andrew had given up before he started because he … “didn’t know what he was doing.”

If there’s anything I’ve learned after interviewing hundreds of people about how they set their SerenDestiny in motion – it’s that PEOPLE CAN’T JUMP ON YOUR BANDWAGON IF ITS PARKED IN THE GARAGE. 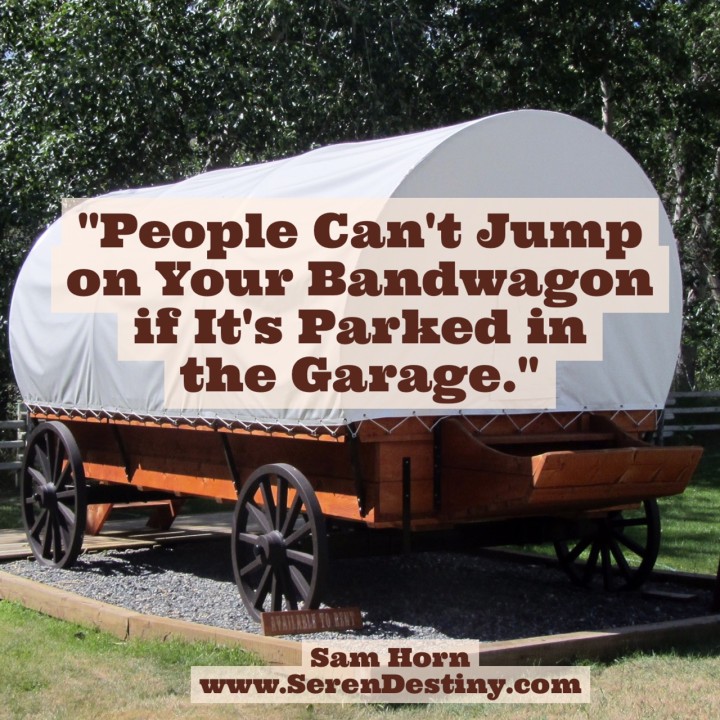 What do you want to do? What would put the light on in your eyes? Are you hesitating because you don’t know what to do?

Remember – you don’t have to know to go. In fact, the only way you’ll ever know is to go.

Get online right now and GTS that dream project that would put the light on in your eyes. . Phrase what you want to do as a question and put it into your favorite search engine – and up will come dozens of resources to help you on your way.

Want to launch your own business? Google “How can I start my own ___ and then fill in the blanks, e.g., dog walking business, web design business?

Want this year to be your best ever? Want the light on in your eyes? Don’t wait until you have all your ducks in a row. GO! GTS what you want to do. And then get your bandwagon (your dream project) out of the garage and get moving.

Want an update on Andrew Horn? After ensuring the continued leadership of DFK-DC, he has launched a new “bandwagon.” Check out TRIBUTE

Want more insights on how to get your bandwagon out of the garage? Check out other posts on Sam Horn’s website SERENDESTINY which shares inspiring lessons-learned from her Year by the Water and tips on how you can create a love you love that matters.