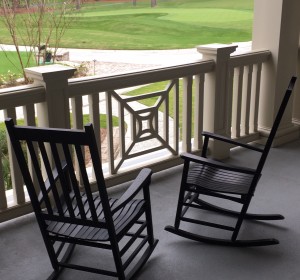 “The trouble is, you think you have time.” -Buddha

I met someone at Hilton Head Island, South Carolina today, and we ended up strolling the beach together.

She was intrigued with My Year by the Water, and wanted to know the catalyst behind it.

I told her, “The clock is ticking, not in a morbid way, but in a motivating way.”

So often we wait for the perfect circumstances to do what we really want. We wait until we “retire,” until we have more money or time.

Do you know ANYONE who has more time than they used to? Plus, some people retire only to find they don’t have the health or resources to do what they want.

I was also motivated by something my mom used to say.  If I talked about something I wanted to do but, for whatever reason, wasn’t … she would say, “A year from now, you’ll wish you had started today.”

Mom, you were so wise.

If you’ve read Paulo Coelho’s classic The Alchemist, you remember how the main character, a shepherd named Santiago, pursues his “personal legend” – the calling that motivates him to trek to the Egyptian Pyramids.   Along the way, he encounters a crystal shop owner with a fear of change who had abandoned his personal legend and who is filled with regret as a result. That part of the story is a cautionary tale of what happens when we ignore the nudges that call us.

Something that happened when I had an opportunity to present Tongue Fu!® for a Young Presidents Organization conference in Ireland also motivated me to act on my own personal legend of trekking to bodies of water and writing about them.

The YPO event was extraordinary, but what made it even more special was that, since this was a Family University, the organizers had graciously invited me to bring one of my sons with me.

Tom was tied up with his studies at VA Tech, so Andrew lucked out and got to come along and participate in some of their one-of-a-kind activities, including cycling on part of the Tour de France route.

After the event, we had two days to play.  The first day, we toured Dublin and Andrew had his first (official) beer in the 360 degree view, floor-to-ceiling windowed bar atop the Guinness factory.

That night, we brainstormed what to do the following day.  I went online, explored options, then looked up and said, “We could go to Paris for a day.”

The next morning, we flew to Paris, and strolled along the Champs de Elysee, posed under the Arc de Triomphe, marveled at the Eiffel Tower and enjoyed a  sublime croque monsieur at a quintessential Parisian sidewalk café. We even had a chance to tour The Lourve.  Andrew stopped at one point, shook his head and said, “Mom, where’s all the famous art?  I haven’t seen any.”

I laughed out loud, “Andrew, turn around.”  He was standing in front of the Venus de Milo.

Andrew and I often think back to how much fun we had in Paris. And we realize that what mattered wasn’t  how much time we had there, what matters is that we had time there.

How about you? What do you really want to do? What’s calling you?  What’s your personal legend? What are you waiting for?

Addendum:  Didn’t know when I was writing this that some new science is supporting the motivating benefits of considering our mortality.  Check out this article in the New York Times: Be Happy, Think About Your Death.

In it, reporter Arthur C. Brooks says, “Paradoxically, meditation on death can be a key to better living. It makes one ask, ‘Am I making the right use of my scarce and precious life?'”

The bottom line?  Instead of wondering or worrying how much time you have, simply choose to make the most of the time you do have.  You’ll never regret answering your calling; you’ll only regret not answering it … sooner.

Sam Horn –  Intrigue Expert, TEDx speaker, author of IDEApreneur, Tongue Fu! and Washington Post bestseller Got Your Attention? –  has the best of all worlds.  She’s trekking to bodies of water and writing about them while continuing to do work she loves, speaking for such clients as National Geographic, Boeing, Cisco, Intel, Capital One, and helping consulting clients craft one-of-a-kind projects that scale their impact – for good.