Can you believe, before this trip, I never used GPS?

I remember when my son Tom, a recent graduate of Virginia Tech, moved from Reston, VA to Houston to start working at Mission Control at Johnson Space Center.

I asked him, ‘What route are you going to take? Through the Smoky Mountains or along the Gulf Coast?”

He looked at me like I was crazy and said, “GPS, Mom.”

I now know what he means.

After crisscrossing the country from coast to coast, I don’t know how I could have navigated it without its much-welcomed voice telling me where to turn and when.

I’m also grateful to the little GPS lady for helping me discover treasures off the beaten (or grid-locked) path.

I was driving from Duck, NC to Washington DC on the notorious 95. This was a Sunday, not a work day, so there shouldn’t have been much traffic, right?

Wrong!  95 was backed up for miles. Thank heaven, the trusty little GPS lady pinged me with a “faster route now available.”

But it wasn’t just a faster route … it was a fresher route.

I’ve traveled that stretch of 95 dozens of times. Been there, driven that. But I’ve never explored the green back roads through rolling horse country and experienced the charming small towns that exist minutes away from that congested interstate.

Metaphorically speaking, it made me wonder what other “roads less traveled” exist off our beaten path?

Where else are we taking an obvious, habitual route instead of exploring different options?

Where else are we settling for crowded paths instead of striking out on our own?

What delights await us if we dare to do the new instead of the tried and true?

Another well-deserved shout-out to Audible, my constant driving companion on my Year by the Water.

Over the last 10,000 miles (really, started Oct. 1 and my loyal Toyota Highlander just logged its 10,420th mile), I have never been alone or lonely.

First, because I stay connected via a current of loving relationships with my friends and family who are with me –  even when they’re not with me.

Second, because I’ve laughed out loud, reflected, been endlessly intrigued and even shed some tears as I listen to fascinating authors share their life stories and insights.

A favorite has been Gloria Steinem’s “My Life on the Road.” In her thought-provoking memoir,  she recalls campaigning for both Barack Obama and Hilary Clinton as they competed for the 2008 Democratic nomination. When it was time to make a choice, she couldn’t make up her mind who to endorse.

She finally had an epiphany.

Barack Obama would probably NOT feel betrayed or lose the nomination if she did not endorse him. But Hilary might; so she endorsed Hilary.

Back to deciding which routes to take in our life.

I think, at some level, we betray ourselves when we consistently take the crowded route.

A more interesting life lies just off the congested path. 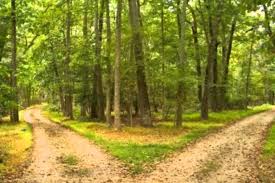 meaningful life unfolds when we have the courage and curiosity to strike out on our own and take roads less traveled.