“There is a voice that speaks without words. Listen.” – Rumi

I re-read my Year by the Water manifesto that was downloaded to me while driving along California’s Pacific Coast Highway. And I’m reminded that my original plan was to not plan every minute of every day. I had promised to do the “opposite of my always” and cooperate with what wanted to happen instead of control it.

Hmm. I’m in Tampa and I’m supposed to take an overnight train to Savannah where I’ll be speaking in a few days.

However, a little voice whispers in my year, “You don’t have to take the train. There are no options on trains. If you see something intriguing, too bad, so sad. You don’t have freedom to get off and explore it. You just whiz on by. Why not drive?”

Sounds good. I cancel the train and start driving. Instead of locking myself into a hotel reservation for that night, I decide to make it up as I go and respond to whatever catches my interest.

I check the map to see what’s ahead. Wow. Marineland, the world’s first oceanarium and the first in the United States to offer a dolphin encounter, is 89 miles away in St. Augustine. I’ve always wanted to swim with dolphins. Here’s my chance. I call and ask, “Any openings for this afternoon?”

They do, which is how a couple hours later, I find myself swimming with Zach The Dolphin. What a thrill to get in the water, meet Zach face to face, stroke his rubbery skin and look him in the eye.

There’s only three of us in our group so our guide turns it into a mini-training session. She asks, “Would you like to give Zach a command?”

She tells me, “Point your finger to the sky.”

I do as she says. Zach stands on his tail and zooms across the pool.

He swims back for his fish treat and waits, eyes bright, for what’s next.

The trainer says, “This time, circle your finger three times.”

I point my finger to the sky and twirl it three times. Zach takes off, dives deep,then LEAPS out of the water into a triple back flip.

I can’t help myself. I thrust both arms into the air in an exultant Y (think Y-M-C-A.)

The unexpectedness of it all fills me with joy. I didn’t even know Zach existed a few hours before!

This never would have happened if I’d locked myself into a pre-determined destination that would have put blinkers on my day. This delightful discovery happened because I honored my instincts and left room for whims.

What is a whim? It’s a “Sudden desire or change of mind, especially one that is unusual, unexplained.”

I believe whims are more than a sudden change of mind. They may seem “out of the blue,” but I believe these serendipitous experiences happen for a reason. They are our best future meeting us halfway.

Here’s what I mean. I saw security consultant Gavin de Becker, author of The Gift of Fear, interviewed on TV. He told the reporter he learned something profound after debriefing people who had been assaulted or kidnapped. His first question to them was, “Did you have any warning?”

Guess what they all said? “I knew something was wrong.” Their gut told them they were in danger, but they let their intellect over-ride their instincts. They looked around and thought, “It’s broad daylight. I’m in an armored car. I’m being silly.” They discounted their sixth sense.

I think a lot of us discount our sixth sense. We honor our intellect instead of our instincts. We get these intuitive nudges, these alerts, but we ignore them. Or we get whims, but we’re too busy to follow up on them.

Louis Pasteur said, “Chance favors the prepared mind.” I believe chance favors the aligned mind. I have learned, that is I get a whim that’s in alignment with my instincts and interests, I should carve out time to pursue it. Every time I do, I am delighted with a congruent discovery I wouldn’t have experienced otherwise.

Whims aren’t an accident. They are not simply a coincidence, blind luck or serendipity. The universe is showing off. It is working overtime to connect you with someone or something that will enhance your life. Whims are your best future meeting you halfway.

Dr. Wayne Dyer said, “If prayer is you talking to God, intuition is God talking to you.”

Do you honor your instincts? Your sixth sense? Do you listen to the voice that doesn’t use words – or you over-rule your intuition with your intellect, logic or reason? Do you ignore whims or promise yourself you’ll follow up on them “later?”

These aligned opportunities won’t be there later. They are a sublime confluence of you being in the right place at the right time, right here, right now.

Ram Dass says, “Our plans never turn out as TASTY as reality.”

From now on, choose to partner with life instead of trying to plan every minute of it.

Act on your instincts. Listen to the whims. Understand nudges, whims and instincts are trying to do you a favor. They have your best interests at heart. Honor them. 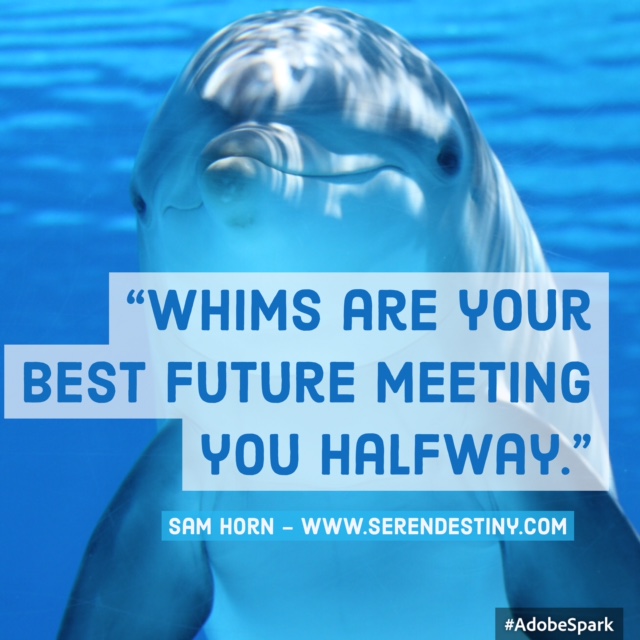