Many people I interviewed during my Year by the Water told me, rather wistfully, that they hoped, planned, dreamed of doing something similar … someday.

When I asked why they weren’t doing it now, they gave a lot of reasons including that they felt they were “too old” and had “missed their chance.”

Too old? Missed their chance?

I shared my belief that we’re never too old – or too young – to make our dreams come true. Several people were skeptical so I shared two of my favorite stories:

I was in Aptos, CA wrapping up my SOMEDAY is Not a Day in the Week manuscript to turn in to my publisher St. Martin’s Press.

After a couple of rainy days, the sun came out which meant it was time to get up, get outside, and get moving.

I was walking through Seacliff State Park when two women popped out of their RV and asked me to take a picture of them. “Sure,” I said with a smile, “if you tell me your story.”

Which is how I learned that Sheila had told her friend yesterday, “It’s time to take a break.” June resisted but Sheila persisted. She was even wearing a sweatshirt that said, “Nevertheless, she persisted.”

They hitched up their trailer, told their families they’d be back in a couple days, and drove from their home in central California, a couple hours away.

I asked, “What gave you such clarity about not waiting for someday to do what was calling you?”

Sheila said, “I’m an insurance agent. One of my older clients retired last year and bought the huge, fancy Winnebago of his dreams. He drove it to my office to show it to me and to add it to his account. I watched out the window as it took him about twenty minutes to park the darn thing and get out of it. He’s in his late sixties and doesn’t move very well anymore.

He came in, slammed the door, slumped down in a chair and said, ‘I waited too damn long, and now I’m too old to enjoy it.’” She shook her head and said, “‘I’ll never forget that.”

June chimed in, “We’ve taken our kids everywhere – Hawaii, Disneyland, the Grand Canyon. We want to make memories with our kids before they don’t want to spend time with us.”

I asked if I could share their story because they’re such inspiring examples of why NOT to wait until later to do what’s important to us. Later may be too late.

You may be thinking, “I agree with this in theory, but you don’t understand my circumstances.”

You’re right, I don’t. Here’s what I suggest though. Next time you see an arts and crafts show in your area, GO.

Why? They are full of “real-life” people who are walking-talking proof that we’re never too old to make our dream come true. Here’s what I mean.

I was traveling through the South. I checked into my hotel on the Savannah Harbor, discovered the Springtime Craft Show was being held at the convention center next door, and went to check it out.

My first stop was at the booth of Toffee to Go. Lisa Schalk, former stay-at-home mom, told me that several years before, she had cooked up home-made white chocolate/macadamia nut toffee to give as Christmas presents to friends and family. They loved her innovative flavors and begged her to make more. She started going to weekend arts/crafts fairs where her toffee kept selling out. She told her husband Jim, a hospitality executive, “I think we’ve really got something here.”

He told me, “I thought people were just being ‘nice,’ until I went with her one weekend and witnessed for myself everyone’s enthusiastic response. People had driven from hours away to buy her toffee in person. We bet on ourselves. I quit my job and we went all in, full-time.”

Fast forward. They just bought a 16,000 foot warehouse, were featured in O’s Christmas issue, and have corporate clients around the country. “People tell us, ‘Oh, you’re so lucky Oprah’s Favorite Things found you.” She smiled, “Luck is a lot of 2 a.m. nights, but it’s worth it.”

I discovered the “Pretty Darn Good Salsa” couple in the next aisle. They created their own special blend with beans, corn, cilantro and secret ingredients for a Super Bowl party. Everyone loved it. They started making bigger batches. After retiring (he was a school teacher for decades), they now hit the road every weekend. He says, “It may be 8 degrees back home, but we know we’ll be in Florida that weekend, visiting our daughter, meeting all kinds of interesting people and hearing their stories, while paying for our retirement. It’s the best of all worlds.”

Next I was drawn to a booth featuring wearable art. The proprietor Lynn Shore, told me, “My grandmother, who had the patience of Job, taught me to knit when I was eight. I started hand-crafting gifts for friends and realized, “This isn’t just a hobby; it’s a business.”

When I asked, “What do you like best about these festivals?” Lynn thought about it and then gave a profound answer, “I am inspired by the creativity of humanity. It is a blessing to be here.”

What is the moral of these stories? None of these business owners studied these careers at college. None of them could have predicted they would turn their passion into a profitable and meaningful profession. However, all of them are grateful to have “encore careers” where they’re doing work they love that puts the light on in their eyes and puts money in their bank account.

John Barrymore said, “A man does not become old until regrets take the place of dreams.”

Get clear on your dream. Ask yourself, “What could add meaning to my life? What am I good at, what do I love to do, that people would pay for? How could I turn my purpose and passion into a profitable profession? How could I craft – or cook up – an encore career where I have the best of all worlds?”

Then get creative and set it in motion today … not someday.

Sam Horn – CEO of the Intrigue Agency and TEDx speaker – is on a mission to help people create a quality life-work that adds value for all involved. Her work has been featured in NY Times and taught to NASA, Intel, Boeing, Accenture. Want Sam to share her keynote with your group? Contact Cheri@intrigueAgency.com

Want more ways to turn your passion into your profession? Check out Sam’s book IDEApreneur. 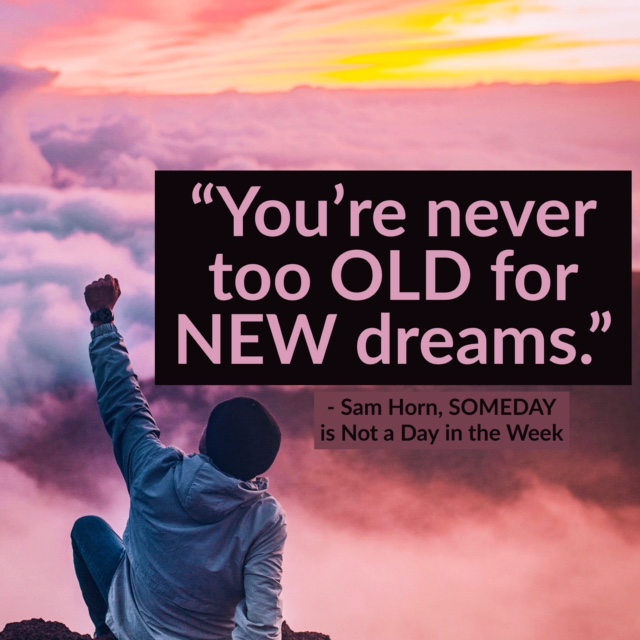