I had an opportunity to meet up with my son, Andrew, who lives in NYC, recently. 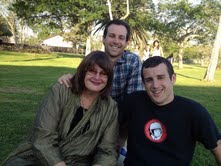 Andrew knows I’ve been eating healthier these days, so he made reservations for, what I found out later, is considered one of the area’s finest vegan restaurants. Since NYC is one of the food capitals of the world, that’s saying something.

I arrived early and looked over what I thought was the menu. There was only 12 items on it and nothing I wanted to eat. It was succotash here, tofu there, broccoli everywhere. Nothing looked even vaguely appetizing or palatable to me.

Please know, I realize this place is a goldmine to veggie-lovers. However, up until 6 months ago, I would head the other direction at the first sign of peas and their brethren.

Then, I discovered, much to my amazement and delight, you can blend spinach (spinach!) and kale (KALE!) into a green smoothie and it actually tastes good … and is good for you.

Suffice it to say, this was a mini-miracle after 50+ years of avoiding vegetables. It’s changed my diet, my body and my life. Thank you Wildfit!

Back to the restaurant. The only thing I see on the menu I think I can get down is linguine with clam sauce. Andrew texts that he’s running late and suggests I go ahead and order for us. I do.

Andrew arrives with his ever-present skateboard. One of the many things I love about Andrew is he actually scoots around Brooklyn and Manhattan on a skateboard. Geesh, he even takes his surfboard on the subway to Rockaway Beach to re-unite with the ocean and get in some waves. As the saying goes, you can take the boy out of Maui, you can’t take Maui out of the boy.

I digress. Back to the restaurant, again. Our food arrives. Andrew takes one look at my steaming pile of linguine and says, “Mom, I thought you weren’t eating pasta.”

Double-take. Andrew looks at me, looks at the pasta. “Then, why did you order the pasta?” 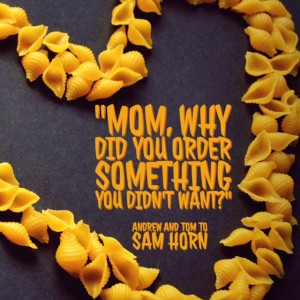 He looks at me in consternation. “Mom, it is a big deal. You say you’re not eating pasta, but you just ordered pasta. I don’t get it.”

I try to brush this aside, to focus on what I think is important. “Andrew, really, let’s just have our meal. We only have a little more than an hour together before I need to Uber to the train.”

Andrew persists, “Mom, why did you order something you didn’t want?”

I can see he isn’t going to let this go (good for him) so I try to explain my thought process.

I said, “Andrew, I didn’t see anything on the menu I wanted, but we only see each other every few months, and we only have a little bit of time tonight, and I didn’t want to make an issue of it. So I ordered the only thing I thought I could eat.”

Here’s what he says. “Mom, do you know what a mixed message that sends?”

Wow. I never thought of it that way. I realized, in that moment, I’ve been doing this most of my life.

My default is to do what I hope will contribute to a peaceful interaction. I do this with what I think are good intentions.

My thought process was, “Andrew’s gone out of his way to book us a table at a special restaurant. But if I say there’s nothing on the menu I want, that would hurt his feelings, and I want us to have a nice dinner, so I’m not going to say anything because I don’t want to make an issue of it.”

But what I don’t realize is, I AM making an issue of it. In fact, I am creating confusion. I’m creating an undertone of dissonance.

I know I’m extrapolating by speaking for women in general … but hey, let’s go there.

This is why men can never figure out what women really want. We never say what we truly want.

With the best of intentions, we project what we think other people want, and then say that’s what we want, because what we want is for the people we care about to be happy.

The irony is, sublimating what we want doesn’t make other people happy; it makes them WRONG.

Like Andrew, they see or sense we’re doing something contrary to what we want. And that’s not what they want. They want us to be happy too.

So, what we end up with is two people trying to make each other happy … and no one is happy.

Oh, what tangled webs we weave.

Thank heaven Andrew got to the heart of the matter. He asked, “Mom, what do you want to eat?”

This time, I told him straight out, “A steak.”

He asked our waiter to package up the food (he and Miki would have it later). We headed to Whole Foods, a block away, bought some steak and salmon for me, some salad for him, walked to a nearby park and sat outside under a full moon getting caught up, each of us eating and enjoying what we truly wanted.

Now, you might think I got clarity around this, but no. Seems lifelong habits take awhile to change.

A couple weeks later I’m in Houston with my son Tom, who works at NASA’s Johnson Space Center with the International Space Station, along with his wife Patty, who has the world’s greatest job title, Astronaut Scheduler.

I got to play Gramma Sam and help take care of 2 year old Mateo while Patty was in Moscow, serving as a liaison to the Russian Space Agency. An enduring memory was watching Tom, Patty and Mateo connect on SKYPE. As Mateo blew kisses to his “screen-mom,” halfway around the world, I thought, “Now, that’s a modern family!”

After Patty signed off for the night, Tom says, “A new seafood place just opened on the Keemah waterfront. Want to try it tomorrow? After all,” he says with a grin, “You ARE still on your Year by the Water.”

“Absolutely, I’m in the mood for some shrimp.”

The next evening, we arrive early before the crowd. Our waitress shows us to our table and comes back a moment later with our iced tea and water. She asks, “Would you like an appetizer?”

I look at Tom and ask, “How about some shrimp?”

“I thought you were going to have shrimp for dinner.”

“You want shrimp for an appetizer AND for dinner?”

I hesitate. It sounds weird. I defer, “What looks good to you?

“Will Mateo eat them?

You see where this is going, don’t you?

Sure enough. The empanadas come. Tom puts one on my plate.

He gives me the exact same look Andrew gave me. “Mom, why would you let me order something if you knew you weren’t going to have any?”

I cannot believe I reverted to my default. I tell Tom, “I obviously didn’t learn this lesson, because I did the same thing with Andrew a couple weeks ago.”

One of the many things I love about Tom is he cuts to the chase. He said, “I don’t understand. Why would you do that?”

I said, “Tom, I’m just coming to realize that I grew up automatically deferring to what I thought others wanted in a misguided attempt to keep the peace and keep everyone happy.

You and Andrew are showing me that I do this without even thinking, and that even when I do it with the best of intentions, it produces the exact opposite of what I want.

You’re right, it would have been so much cleaner if I had said, ‘Tom, I actually do want shrimp as an appetizer and as my entrée. If you want something else, that’s cool. I’m still going to get a shrimp cocktail.”

Tom said, “Exactly. When you say what you want, I don’t have to wonder what you really mean, or wonder if there’s a hidden agenda somewhere I don’t know about.”

“I get that. A long time ago, you, Andrew and I agreed we would tell each other the truth. It un-complicates communication and makes life so .. much … simpler.

Tom looked at me as if this ought to be a “duh” moment. It’s crystal clear to him and Andrew how much simpler it is just to say what we want. It’s taking me awhile to undo decades of “going along to get along” deferring.

To use a water metaphor, every time we ask for something we don’t want, it sets a ripple effect  of dissonance in motion.

In my upcoming book about the experiences and epiphanies from my Year by the Water, I go into more detail about how this trip – which gives me time, space and autonomy to make it up as I go – has opened my eyes to the fact that it’s been so long since I’ve had the freedom to do exactly what I want … I don’t even know what that is anymore. It’s so buried, I’ve had to excavate it.

It can be as simple as realizing I really do want to stay in places ON (not close to) the water. For the first few months, I over-rode that preference and abdicated what I wanted in order to be frugal. I would stay at a resort near the water but opt for a cheaper room. Fifteen years of being a single mom who needed to be budget-minded kept kicking in, telling me I needed to save money.

Thank heaven for Glenna Salsbury. I was telling her about the JOY I felt the week before when I upgraded and walked into a beach-front room with a stunning view of the Pacific Ocean.

Thank you Tom, Andrew and Glenna for opening my eyes to a life-long default that hurts rather than helps.

Starting today, I will remember  it works better for everyone when I ask for what I truly want – clearly, simply, and from the beginning.

Contrary to what we may have been taught, this is not selfish. It is a precursor to heartfelt happiness.

If we all do this, we can deal with what IS instead of complicating matters, creating confusion, and setting up an undertone of dissonance and unintended deception.

Tom and I agreed, from now on, the word PASTA is going to be our CODE for hedging on what we really want.

“ARE YOU ORDERING THE PASTA?” will be our short-hand for “Are you saying what you think I want – instead of coming straight out and asking for what you want?”

When it comes to asking for what you want – what was modeled for you, taught to you, growing up?

Are you constantly deferring to others? Has it been so long since you’ve tapped into what you really want, you no longer know what that is?

Are you comfortable stating what you want – or do you automatically go along with what other people want – thinking it will lead to peace and happiness?  How does that impact you and the people around you?

I still have a lot to learn around this. I look forward to hearing your insight.