It’s hard to believe, but it was only five years ago that Serena Williams suffered what could have been life/career-ending injuries, including two foot surgeries and a pulmonary embolism. Serena is quoted as saying she didn’t know if she would “get out of the hospital,” much less play tennis again.

In 2011, her sister Venus Williams was diagnosed with ‪#‎SjogrensSyndrome‬, an auto-immune disease that causes numbness, joint pain, swelling and extreme fatigue. 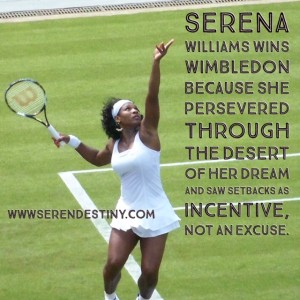 Yet, today, Serena won her 22nd grand slam title at Wimbledon to tie Steffi Graf, and she and Venus are playing in the doubles final, (even though they were ranked #250 in the world and unseeded in the doubles draw of this tournament).

But they wasn’t finished. They weren’t willing to turn their backs on their talent. They believed they still had greatness in them.

Instead of abandoning their dream, they re-dedicated themselves and chose to use those setbacks as INCENTIVE vs. an EXCUSE.

As a result of re-committing themselves to doing and being their best and fighting for what they cared about, they’ve reached a much-welcomed oasis of success.

The beauty of this? Their success is not a mirage; it is a well-earned reality.

Their success is a result of deciding that what they wanted mattered enough to to persevere through the dark times … even when there were no guarantees.

How about you? Are you in the desert of your dream?

If you’re an entrepreneur, are you not getting the clients or contracts you deserve?

If you’re in an organization, are you not getting the projects or promotions you deserve?

If you’re in between jobs, are you not getting the interviews, call-backs or offers you deserve?

Are you planning your own adventure – your own version of a Year by the Water – but it’s not coming together as you hoped?

Could you choose to “pull a Serena?” Could you persevere like Venus?

Could you remember who you are and what you want and choose to live forward … no matter what? 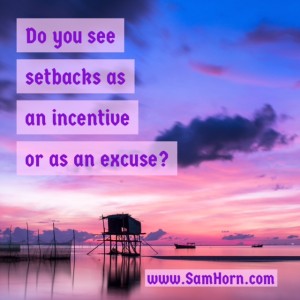 Soren Kierkegaard said, “Life can only be understood backwards; but it must be lived forwards.”

Looking backwards, every successful person will tell you there were setbacks along the way that seemed unsurmoutable – that could have drained their conviction and caused them to quit.

Instead, they transcended those doubts and carried on through the down times. In doing so, they re-established momentum and moved closer to making their dream a well-earned reality.

As Winston Churchill said, “Success is not final, failure is not fatal; it is the courage to continue that counts.” He also said, “If you’re going through hell, keep going.”

If you are facing setbacks, remember who you are and what you want. Choose to see those setbacks as incentive rather than as an excuse.