One reason I’m calling my new book SOMEDAY is not a Day in the Week is because it’s sad to see how many people are working themselves to death, thinking they’ll relax and enjoy themselves when things aren’t so crazy at work.

I’m not making that up.

People promise to take better care of themselves when they’re not so busy. What if that day never comes?

While on my Year by the Water, I had a crucible moment that demonstrated (rather dramatically) the consequences of putting everyone else first. Hope this story motivates you to put yourself back in your own story and do something this week that brings you joy.

My plan for the day was to drive California’s Pacific Coast Highway from Monterey to Morro Bay. However, work responsibilities came up that morning, so it was late afternoon before I hit the road. I didn’t think much about it until the sun went down and it got dark. And when I say dark, I mean no moon. no light.

If you’ve taken this spectacular drive, you know about its many hairpin turns. In the day, you can see what’s ahead and adapt accordingly. But it was pitch black which meant I couldn’t see beyond my headlights. I completely lost my equilibrium because I had no idea what was coming up next.

What made it worse was the road often narrowed to one lane because of construction to fix damage caused by recent landslides. The only thing between me and a thousand foot drop down to the rocks below was a rather flimsy looking guardrail.

A truck zoomed up behind me and flashed its brights. I did what I always did, what I’d been taught to do growing up in a small mountain valley. I looked for the next pull-out and pulled over to let the driver behind me go by.

The only problem? The pull-out was gravel. And shorter than anticipated. I braked and started sliding. I finally came to a stop a couple feet from the cliff’s edge.

I sat there and shook. The truck was long gone. It was just me, the road, and my realization that my default of putting others first had just about cost me my life.

Does any of this sound familiar? That was a rather extreme example of “selflessness,” but on some level, is your default to put others’ needs before your own? At what cost?

If you’re a business owner, executive, parent or team leader, this may have become your norm.

Somewhere along the way, was it modeled for you that the meaning of life is to be found in service? There are hundreds of quotes perpetuating this belief that serving others is the right thing, the noble thing, to do.

For example, Gandhi said, “The best way to find yourself is to lose yourself in the service of others.”

Yet serving others at the cost of ourselves is an extreme … and any extreme is unhealthy.

Self-sacrifice comes at a price. We lose our equilibrium and end up compromising our health and happiness. What’s worse is that when we habitually take ourselves out of our own story, we teach the people around us we don’t matter, that what we want and need doesn’t count.

Is that what we want to teach? Is martyrdom the model we want to pass along?

A college counselor told me, “Sam, I don’t have kids, but I do have students. Many are away from home for the first time. They’re lonely, confused and overwhelmed. My heart goes out to them, so I’ve given some my home phone number so they can call if they’re having a tough time. Good idea in theory, not so good in practice. I spend many evenings on the phone mitigating one crisis afterhonoring another. My husband is starting to resent this and I can’t blame him. Plus, I’m getting burned out because I never get a chance to recharge.”

I told her, “Good for you for being there for your students. The question is, are you also being there for yourself? Think about the Law of Unintended Consequences. What we accept, we teach. What are you teaching by not honoring your health and by not having any boundaries around your time and access?”

“But I feel so sorry for these kids. They all have a story.”

“I understand. However, you’re thinking only of their story and not your own. Where are you in this story?”

“But I can’t just cut them off and turn my back on them.”

“I’m not suggesting you be selfish and think only of yourself. I’m suggesting you serve others and yourself. Create some boundaries with metrics. If your boundaries don’t have numbers in them, they’re not boundaries. Instead of being available to your students every single night, what is a fairer balance?”

Suffice it to say, we created a written policy around her “evening office hours” that she posted and handed to her students. They still have an option to contact her in case of an emergency, otherwise there’s a step-by-step process for how they can schedue time with her on campus.

She contacted me later to say our conversation, and her new policy, taught her a valuable lesson. “I never realized how much I was devaluing myself by focusing exclusively on my students’ needs. I see now that my compassion for them was at the cost of compassion for myself. My husband thanks you, I thank you.” She laughed, “Someday, my students may even thank you for having someone model for them that it’s not selfish to put ourselves in our own story, it’s smart.”

How about you? Are you running on empty? Burnout is a clear sign we’re not enforcing our boundaries. It’s a clear sign we are people-pleasing and putting everyone else first – and ourselves last.

The good news is, it’s not too late to change this default.

You matter. What you want and need counts. You can be responsible to others and to yourself. You can serve others and yourself.

Put yourself back in your own story. It’s not selfish. It’s smart. 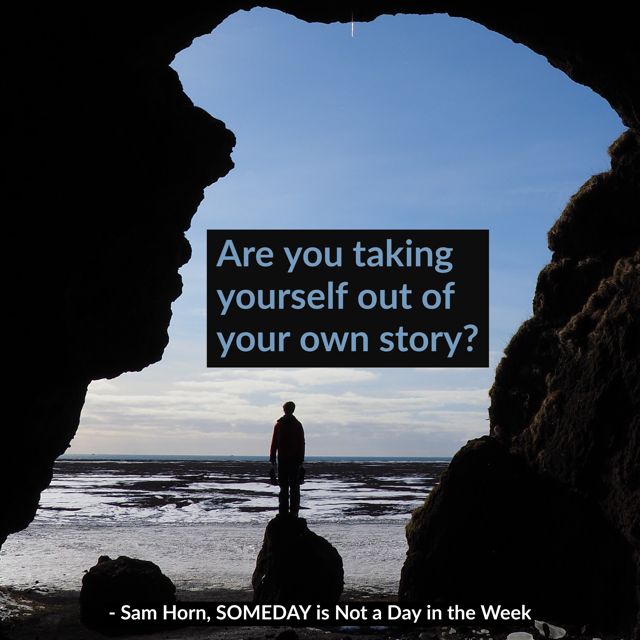