As we wrap up September and head into October, my Year by the Water is supposed to be “over.” 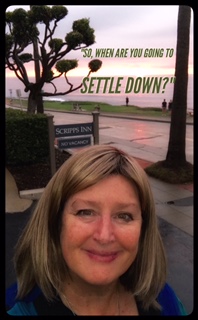 Suffice it to say, I’m not ready for this to be over.  And the words “settle down” are not in my vocabulary.

Why would I want to stop having the best of all worlds?

I remember something James Taylor said while being interviewed on CBS Sunday Morning.  The reporter asked why it had taken him so long between albums.  Taylor said he had been touring non-stop and hadn’t had the time or energy to compose or create.

The reporter asked, “So, you took time off work?”

Taylor smiled and said, “I didn’t take time off work; I did a different kind of work.”

That’s how I feel.  I’m still productive, still speaking, coaching and consulting. I’m just doing it while traveling to bodies of water around the world and writing about my experiences and epiphanies.

I’m not taking time OFF work. I’m working in a new way – an even more meaningful, joyous way.

Sir Frances Bacon said, “Begin doing what you want to do now. We are not living in eternity.  We have only this moment, sparkling like a star in our hand, melting like a snowflake.”

I know I’m fortunate.  I’m in a season of my life where I have the freedom, autonomy and health to do this.   I have a “portable” business I can run from anywhere.  My sons are grown, out in the world and thriving. As Tom and Andrew told me, “Mom, we got this.”  I understand one of the best gifts I can give them now is to model that we have the power to create our own SerenDestiny – a life where the light is on in our eyes.

So, what’s next?  Well, I’m headed to Pismo Beach where I’ll be keynoting the Central Coach Writers Conference.  Then, on to DC to provide media training for NASA and to attend the Washington West Film Festival.  Then … CHINA.  More details on that coming up.

One of the many reasons I want to continue my Year by the Water is because there’s still so many places I haven’t seen yet.  I still haven’t been to Helen Keller’s lake where she said her first word, “Water.”  I still haven’t explored Hudson Valley, Lake Louise and Banff, and the Great Lakes, (which, by the way, is THE most frequently recommended body of water people say I should visit when I ask for suggestions.)

And, I’m looking forward to returning to Montana.  I was just there last week speaking for Senator Daine’s team.  State Director Charles Robison graciously arranged to take me fly-fishing on the Madison River, which was featured in the movie A River Runs Through It. 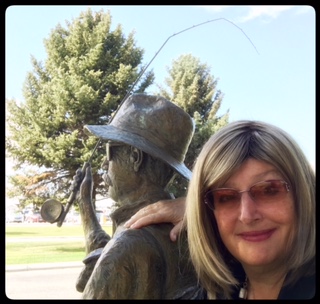 Alas, I got food poisoning and this guy at the airport was the closest I got to fly-fishing.  So, I’ve got a sun-check (what we used to call rain-checks in Hawaii) to go back to Yellowstone and Big Sky Country.

How about you?  Are you doing what you want to do?  Even if you have responsibilities – you’re raising a family, taking care of your parents, working full-time plus, paying bills, out-of-work, dealing with a health challenge – what is one thing you could do this week that would put the light on in your eyes?  How can you bring more of that into your life on an ongoing basis?

If there’s anything I’ve learned in the last year it’s how important it is for us to NOT WAIT for some future date to do what makes us happy.

I was having breakfast at an outdoor café near Morro Bay, CA on September 11.  A group of seniors at a nearby table were talking about how the country has “gone to hell in a hand basket” since then.  A rather grizzled gentleman in the group hadn’t said a word.  One of the women turned to him and said, “What do you think, Al?” He growled, “I think every day is a gift and we should act like it.”

Agreed.  Later that morning, I was driving through Santa Barbara on the way to LAX and stopped to get in my daily walk.  I encountered this stirring memorial on the beach by the pier.  I will always remember these flags, one for every person lost at the World Trade Center on 9/11, waving in the sea breeze.  A sobering reminder to cherish  … every … single … day. 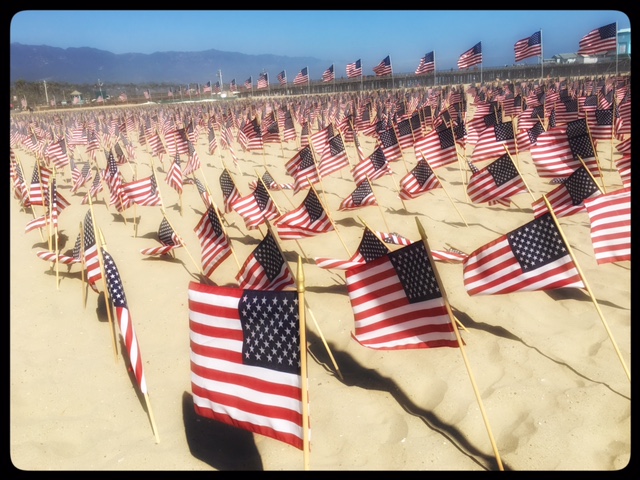